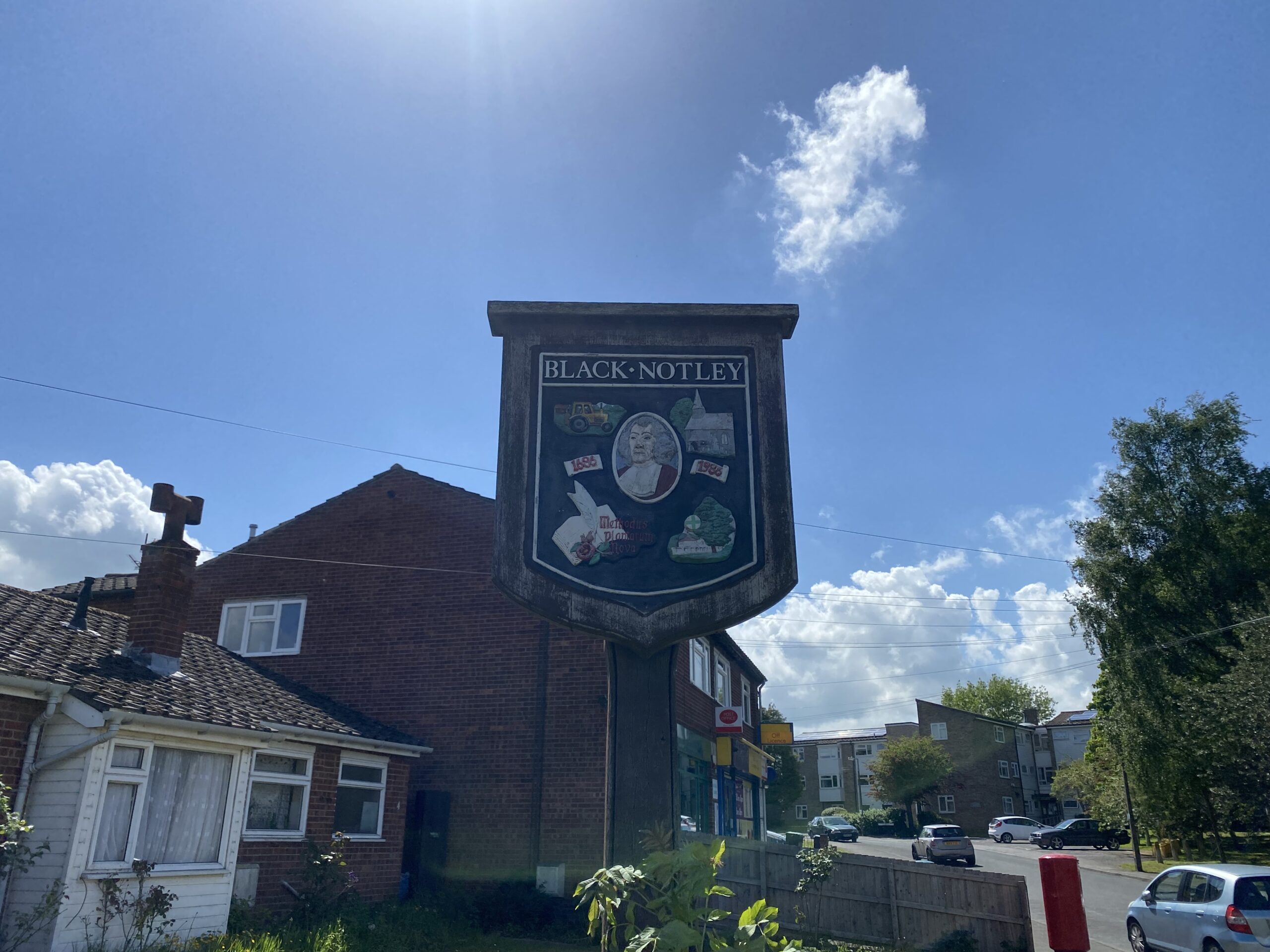 Black Notley is a village and civil parish in Essex, England. It is located approximately 1+1⁄2 miles (2.4 km) south of Braintree and is 9 miles (14 km) north-northeast from the county town of Chelmsford. According to the 2011 census including Young’s End it had a population of 2,478.

The parish church is dedicated to both St. Peter and St. Paul, and has walls of flint and pebble. The nave was constructed in the 12th century and the chancel was rebuilt around the 16th century when also the south porch and bell-turret were added. Around 100 yards to the south of the church is the 15th century Grade II listed Black Notley Hall.

Under the Poor Law of 1834, Black Noltey became part of the Braintree Union.
Interestingly from White’s Directory of Essex, there are notable interests that arose from our humble village…

1848
NOTLEY, (BLACK) a scattered village, from 1 to 2 miles South of Braintree, has in its parish 520 souls and 1936A.2R.17P. of land rising in gentle undulations from the small river Brain, and crossed by the Braintree and Malden Railway, now constructing. About 129A. are woodland, and 36A. waste.

The parish includes the small hamlet of Row Green, and was called Nutlea at the Domesday survey. The soil it various, but very fruitful.

Daniel Bell Hanbury, Esq., of London, is lord or the manor, but a great part of the soil belongs to Mr. Savill, of Colchester, and other proprietors, mostly freeholders.

The hall, or manor house, is occupied by a farmer, and was successively a seat of the Mandeville, Spice, Leveson, and other families. The Spices also held Stauntons; and another estate here, called Buck, or Plumtrees, was the seat of Milbourne Carter, Esq.

Several fragments of antiquity were dug up in the parish, in 1752, among which were an oblong blue glass vessel, a copper vessel, and a copper ornament, terminated by a ram’s head.

The Church (St. Peter and St. Paul,) is an ancient Norman structure, with a wooden turret, containing three bells, and crowned by a shingled spire. It has undergone many repairs, and the windows are mostly insertions of the 15th century, in the perpendicular style. The chancel was renovated in 1847, and the porch is modern, and not in character with the church.

For schooling ten poor children, and the relief of eight poor widows of this parish, James Coker, in 1702, left two houses in Braintree and Bocking, now let for £22 per annum; of which £8 is paid to a schoolmaster for the ten free scholars, selected by the rector.

The poor parishioners have £8 a year from a house, etc., in Rose alley, London, left by Mary Kitchen, in 1722.

The learned Bishop Beddell was born here. In the churchyard is a handsome square monument, on a pedestal, with a long Latin inscription to his memory.

The village is in the district of Braintree, but as of 2010, forms part of the parliamentary constituency of Witham. It has its own parish council, and is part of the wider Cressing, Black Notley, White Notley and Faulkbourne parish cluster.

The Cressing railway station, on the Braintree Branch Line, is around half a mile from the village centre. It is close to the River Brain. In 2002 work was completed on the new estate, built in place of the old hospital giving 350 new houses to the area.

Parish Council Office on Wednesday mornings, between 9-10am

Back to top
Page load link